The decision on an independent energy source is always difficult to make, there are a lot of nuances and assumptions. It concerns fuel and equipment choice, heat recovery, coupling with existing power supply systems, and so on. We are constantly working in the field of power generation, have extensive experience in the repair and operation of equipment, and are well aware of the pros and cons of various generating systems. We are ready to share our experience and work with you to find the best solution for your needs.

Mini-CHPP (small thermal power plant) is heat power plants that serve for the joint production of electric and thermal energy in units with a unit capacity of up to 25 MW, regardless of the type of equipment. Currently, these plants are widely used in foreign and domestic heat power engineering: counter-pressure steam turbines, condensing steam turbines with steam extraction, gas turbine installations with water or steam heat recovery, gas-piston, gas-diesel and diesel units with heat recovery of various systems of these units. The term ‘cogeneration plants’ is used as a synonym for the terms mini-CHPP and CHPP, but it is broader in meaning, since it implies the joint production (co — joint, generation — production) of various products, which can be both electric and thermal energy, as well as other products, for example, thermal energy and carbon dioxide, electric energy and cooling, etc.

In fact, the term ‘trigeneration’, which implies the production of electricity, heat and cooling, is also a special case of cogeneration. A distinctive feature of mini-CHPP is a more economical use of fuel for the produced types of energy in comparison with the generally accepted separate methods of their production. This is because electricity on a national scale is produced mainly in the condensing cycles of thermal power plants and nuclear power plants, which have an electric efficiency of 30-35% without a heat consumer. In fact, this situation is driven by the current ratio of electric and thermal loads of localities, their different behavior during the year, as well as the inability to transmit heat energy over long distances, in contrast to electric energy.

The mini-CHPP module has a gas-piston, gas-turbine or diesel engine, an electric power generator, and a heat exchanger for heat recovery from water when cooling the engine, oil, and exhaust gases. A hot water boiler is usually added to a mini-CHP plant to compensate for the heat load at peak. 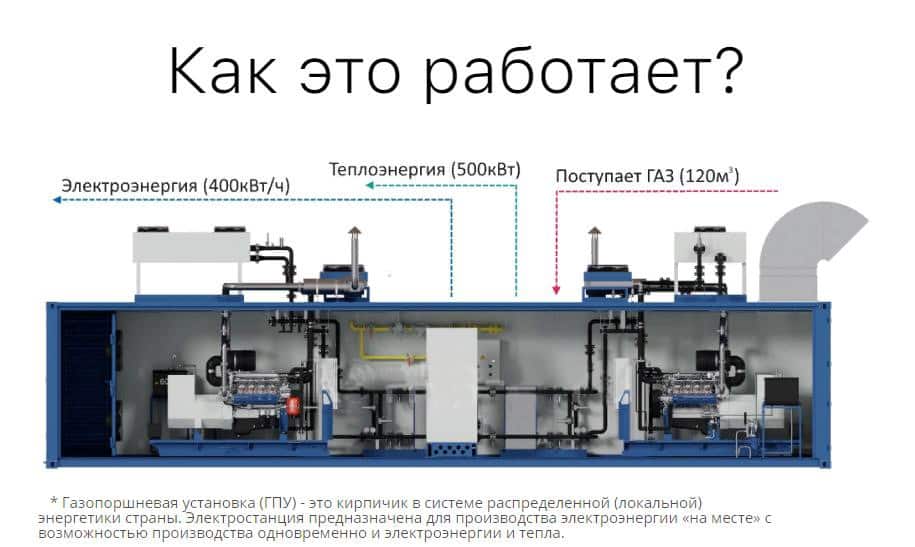 One of the most promising sources of energy is wind. The operational principal of a wind generator is simple. The force of the wind is used to set the wind wheel in motion. This rotation is in turn transmitted to the rotor of an electric generator.

First of all, the advantage of a wind generator is that in windy areas wind can be considered an inexhaustible source of energy. In addition, when wind generators produce energy, they do not pollute the atmosphere with harmful emissions.

The disadvantages of wind power generation devices are the wind power variation and the low power of a single wind generator. Wind turbines are also known for making a lot of noise, so they are often built away from living community.

Wave energy is the energy that waves carry over the surface of water. This is an inexhaustible source suitable for generating electricity. Wave power plants are built to convert wave energy into electricity. They are built directly in the water. In the future, wave generation can produce 4 TW in near-shore areas and up to several dozen TW in the open sea a year.

People’s lives are inconceivable without energy. Everybody is used to using organic fuels such as coal, gas and oil as sources of energy. But their reserves are known to be limited. The day when fuels run out will come sooner or later. The answer to the question “What should we do in the run-up to the energy crisis?” has been long found. We should look for other sources of energy, the alternative, unconventional, renewable ones. So, what are the main types of alternative energy sources now?

Various solar systems use solar radiation as an alternative energy source. Solar radiation can be used either for heating or power production (using photovoltaic cells).

The advantages of solar energy are its renewability, noiselessness and operation without harmful emissions into the atmosphere when processing solar radiation into other types of energy.

The disadvantages of solar energy are the dependence of the intensity of solar radiation on the daily and seasonal rhythm, as well as the need to build a great quantity of solar power plants. The environmental problem lies in the complexity of disposal of toxic and toxic substances necessary for the manufacture of photovoltaic elements of solar systems.